News About My Career 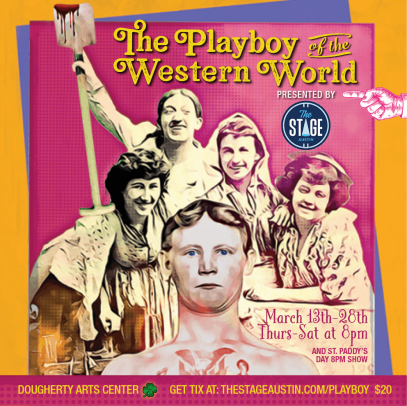 The Stages Austin's production of The Playboy of the Western World runs March 13-28. I'm playing the Widow Quin--such a fun, wicked woman! We have a St. Patrick's Day performance, too. I'm trying to talk them into selling Guinness at the concession stand. :)

In December, The Austin Chronicle's Arts Editor, Robert Faires, released his Top 10 Theatre Treasures of 2019 and my performance in SEVEN received an honorable mention. And I'm definitely honored! 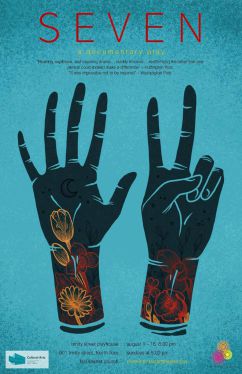 In August, I finally return to the stage (for more than 5 minutes this time) for the first time since 2013! And just to challenge and scare myself, I'll be performing a 20-minute monologue. SEVEN is a documentary play and I'll be portraying real-life Irish activist, Inez McCormack. She was  powerful in her empathy and her fierce protectiveness of the voiceless, and I'm honored to play a complex woman who I admire so much!

The reviews for The Book Club Play are in!

"While the script is indeed top-notch, it's the character-driven action that produces most of the humor and that requires great (not just good) direction (thank you Nikki Zook) and a stellar cast and crew." -Jesse Griffith, Broadway World

"Zook’s direction excels in making sure that each member of the cast is always aware that they’re playing multiple roles in every moment — they are not only inhabiting their unique characters but also modulating their performances through the context of playing to a camera and attempting to present an artificial persona in the documentary." -Andrew J. Friedenthal, Austin American Statesman

November finds us holding auditions for The Book Club Play!

BIG NEWS! I will be directing a full-length play for the first time! I've been asked to direct "The Book Club Play" by Karen Zacarías for Different Stages Theatre Company next March.

This fall, I will be returning to the Austin stage. I will be performing a small role and I will be Assistant Director alongside Karen Jambon for the Different Stages production The Member of the Wedding.

In August, I thoroughly enjoyed getting back in Marco Perella's Film Acting classes! Check out the footage using the Videos tab.

Working on another script for our Shakespeare Remixed series.

I got to take a workshop on Shakespeare's Verse with the outstanding director and teacher, Beth Burns, of Hidden Room Theatre. I couldn't recommend it highly enough! She is wonderful, and I learned so much! I finally feel comfortable performing in verse.

Shakespeare Remixed: The Singles Mixer is now available to view on Vimeo. It's funny, if I do say so myself. :)

We shot the final scene for The Shakespeare Remix with the amazing Aaron Alexander, and we are now in post-production.

A Lot on Her Plate came out! My son has his first IMDB credit, and we're both very proud!

In October and November, Errich Petersen, Martina Ohlhauser and I finally shot the scene we've been talking about and working on for about a year now.

If you know me, you know I love Shakespeare, and I have the utmost respect for his plays. But I also believe that it's possible to respect his words and still have a little fun with them. So, I'm working with Martina Ohlhauser and Errich Petersen on a remix of sorts of a scene from Merchant of Venice. I'm editing it strategically, and putting it in screenplay form. We are working on casting and locations.

I got paid to sit and play Stupid Zombies 2 on my tablet--it was a bank commercial and I was a background actor who was supposed to be using my device. I got to work with Alex Walker again. He directed this commercial and he was our DP on A Lot on Her Plate. Talk about easy money!

I'm continuing to audition, and I've started coaching actors from home. If you're an actor in the Austin area who'd like coaching for an audition, feel free to call or email me. Click here for my contact information.

In August, I worked on a wonderful short film called, A Lot on Her Plate, written by and starring Deana Ricks, and directed by Keller Davis of Escape Plan Productions. I had a great time, and my son got to be an extra in the film as well. It was our first time working on a film set together. Lots of fun!

In the summer, I got to take another film acting class from an amazing coach and working actor, CK McFarland. It is always a pleasure to learn from and work with her! She's awesome!

In March, I worked as the assistant director for Marvin's Room, which was being produced by Trinity Street Players. The show opened March 28, and ran through April 13. We had a fantastic group of actors audition for us, which made casting choices rough, but it culminated in what I think is a pretty darn good cast, and what ended up being a show that I was proud to have worked on. In his review, Michael Miegs said, "We see all of these characters discover one another in a succession of scenes that [are] amusing, dramatic or moving. . . and sometimes, all three."

I took the school-year off from any major projects. My son was starting kindergarten, and there were issues. So, I wanted to provide the stability of mommy being home to tuck him in every night.

On November 5th, the cast of Sing Muse was awarded a B. Iden Payne award for Best Cast! Sing Muse also won for Best Musical Direction, and Best Original Score!

The original, acapella musical, Sing Muse! opened in August! Collaborating on and performing in this production was one of the most rewarding experiences of my life. Directed by the incomparable Rudy Ramirez, with musical direction by Chelsea Manasseri and Jennifer Coy, and starring the most wonderful and incredibly talented cast I could have ever hoped for, Sing Muse was a joy to work on! Don't get me wrong, it was a LOT of work, but working with these people made it a pure blessing!

In June and July, I finally got to play my dream role of "Beatrice" in Shakespeare's Much Ado About Nothing, produced by City Theatre. My performance was nominated for a B. Iden Payne award.

As much as I loved bringing Beatrice to life on stage, I don't think I'm done with this role. I will play her again, as my Granny used to say, "Lord willin' and the creek don't rise."

In January, I played three supporting characters in a new play by Lorella Loftus, called Elizabeth, Heart of a King.  It follows the life of Queen Elizabeth I from her adolescence until her death.

2. Lady Jane Grey, who took the English throne for a brief 9 days after the death of Elizabeth's young brother, King Edward.

Although Mary Stuart was the queen of Scotland, French was her first language, so I acquired a French accent for that role. It was quite a challenge, and the fantastic Rudy Ramirez helped me with it considerably!

I received a few lovely mentions in the reviews, and I've posted links in my Press page.

On September 10, I started my second Advanced Film Acting class with CK McFarland! She challenges me, and I always get to work with some amazingly talented and supportive people!

In September, I was nominated for a B. Iden Payne Award for my work as Karen Wright, in The Children's Hour.  I am honored by the nomination!

On June 4th, I received an Austin Critics Table Award for "Acting in a Leading Role" for The Children's Hour

After a successful run of The Children's Hour, I went back to Film Acting classes with Marco Perella.  After a few months of stage work, I think I needed the refresher!

Also, I recently got to attend the Austin Actors Fair. I had the opportunity to audition for local casting directors, attend workshops with several local acting coaches, and make some new friends.

Now, I'm employed as an acting coach for AMTC! It's wonderful to be back with my AMTC family, and passing on the knowledge and experience I've been blessed with! 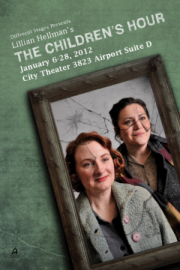 It was a very powerful show and we had some wonderful audiences!!! Check out my Press page for some of the feedback we received. 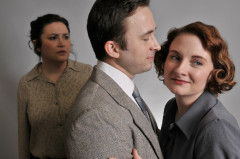 Click on the image to see more promotional photos.

The Different Stages production of Too Many Husbands closed on July 16.  It was a very funny show! I worked as the assistant director and the dialect coach.  Check out some of the reviews.

It was a great cast! They did a wonderful job!!!

Martina Ohlhauser was nominated for a B. Iden Payne award for Leading Actress in a Comedy!  Congratulations, Martina!

I performed in several showcases for around 100 of the industry's top professional in Orlando, Florida.  I was acting, singing, and modeling.  Yes, modeling--women who are 5'2" can be commercial models. :-)

Between seminars and callbacks, I got loads of information and great feedback from some very knowledgable VIPs.  Now I'm home, and I'm hitting the ground running--ready to work my local market!  And I'm getting armed to be a player in major markets as well!

It was an incredibly busy, satisfactory, and inspiring SIX DAYS!